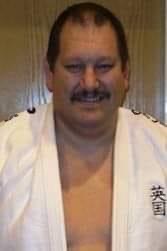 Our congratulations go to Prof. Matt Clempner on his promotion to 9th dan Hanshi in Jiu Jutsu.

Clempner Hanshi has over half a century of experience in various martial arts, as well as being a veteran police officer and Home Office defensive tactics instructor. A former Olympian judoka, Matt has also represented his country in wrestling and is heavily involved with Sambo.

In addition, he is a founder fellow of the Institue of Martial Arts and Sciences, and Director of Training for the Praetotian Academy of Security Studies.